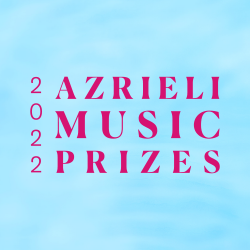 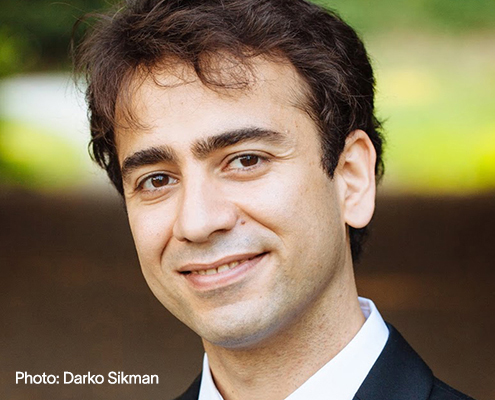 Iman Habi is an Iranian-Canadian composer and pianist, and a founding member of the piano duo Piano Pinnacle. Dr. Habibi has been commissioned by the Boston Symphony Orchestra, The Philadelphia Orchestra, Toronto Symphony Orchestra, and Orchestra of St. Luke’s, with further past and upcoming performances with The New York Philharmonic, Milwaukee, Kansas City, Vancouver, Saskatoon, and Winnipeg Symphony Orchestras, as well as the Chiara, Del Sol, Balourdet, and Fry Street String Quartets.

His awards include multiple wins at the SOCAN Foundation’s Awards, The International Composers’ Award at the Esoterics’ POLYPHONOS (2012), The Vancouver Mayor’s Arts Awards for Emerging Artist in Music (2011), Brehm Prize in Choral Music (2016), as well as numerous grants from the Canada Council for the Arts, BC and Ontario Arts Councils. 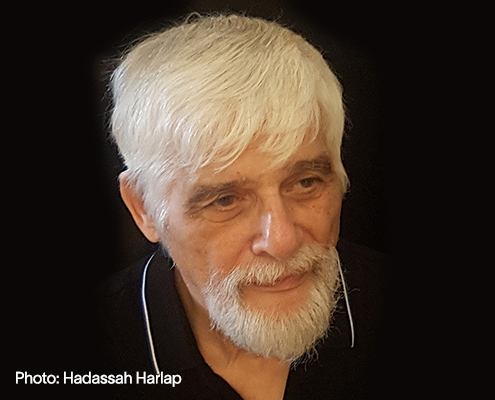 Aharon Harlap, one of Israel’s most prominent composers and conductors was born in Canada, where he began his musical career as a pianist. He completed his studies in music and mathematics at the University of Manitoba, Canada in 1963 , and in 1964 immigrated to Israel. He furthered his studies in composition and conducting at the Tel Aviv Academy of Music, Royal College of Music, London, England, and at the Vienna Academy of Music, Austria with Maestro Hans Swarovsky.

He is the recipient of many prizes including the prestigious ACUM (Authors and Composers in Israel) award for “Life Achievement” in 2008 for his contribution to music in Israel as a composer, conductor and teacher . He was also awarded the “Prime Minister’s Composition Prize” “in 1999 and again in 2014. This year (2020) Harlap was awarded the prize for Life Achievement in the field of Jewish Music

Harlap has represented Israel as an international choral judge at the ” World Choir Games ” (Interkultur) held in Korea, the USA, Austria, Germany, China and recently in Sochi, Russia and South Africa.

In May, 2016 Harlap’s new orchestral work “Memoirs” was performed by the Dohnanyi-Budafok Symphony orchestra, Budapest
under the direction of guest conductor Roberto Paternostro.

In July 2017, Harlap’s clarinet concerto was performed in Bangkok by the Thailand Philharmonic orchestra under the direction of chief conductor Alfonso Scarano, with the clarinet soloist Calogero Palermo, principal clarinetist of the Concertgebouw Orchestra of Amsterdam, Holland.

From 1976- 2018 , Harlap was an Associate Professor in choral and orchestral conducting at the Jerusalem Academy of Music .Since 1997 , he is the Music Director of the Kefar Sava Chamber Choir in Israel. 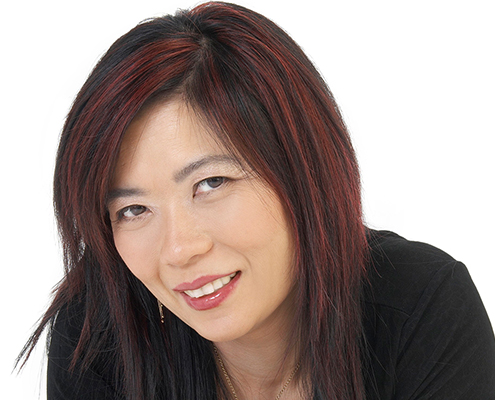 Applauded as a composer whose ‘poetic is often very delicate and introspective…’ (Guido Barbieri, Warner Classics), Ms. Ueda is the winner of international prizes including the 2014 Krzysztof Penderecki International ‘Arboretum’ Composers’ Competition, 2011 Estoterics ‘Polyphonos’ Choral Composition Competition, and the 2013 Boston Choral Ensemble Competition. She is also the recipient of numerous grants from the Canada Council for the Arts, BC Arts Council, and the SOCAN Foundation.

Ms. Ueda holds degrees at Simon Fraser University (BFA) and California Institute of the Arts (MFA) where she studied with Rudolf Komorous, Rodney Sharmon, Wadada Leo Smith, and David Rosenboom. She is currently pursuing a PhD in composition at Durham University (UK) under the direction of Richard Rijnvos and James Weeks.

Her latest recording, I Solisti Della Scalla – Octets is available through Warner Classics.

Join the Azrieli Music Prizes on a journey through eras, environments and cultures, exploring enduring yet contemporary concerns via the musical imagination of today’s best composers.

Rita Ueda’s double concerto embraces birdsong and landscape to reflect on Canada’s shifting multiculturalism.
What does it mean to migrate and settle on land already rich in history?

Canadian-Israeli composer Aharon Harlap gives us five psalms for soprano and orchestra that follow an emotional journey from despair to hope.
This is a song cycle with an uplifting message for our times.

Rita Ueda
Birds Calling… from the Canada in You, for shō, suona/sheng and orchestra (premiere)

Aharon Harlap
Out of the depths have I cried unto Thee, O Lord, for soprano and orchestra 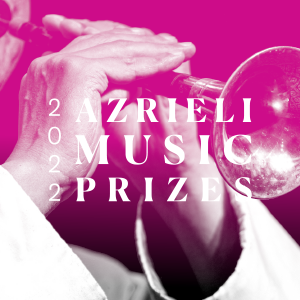