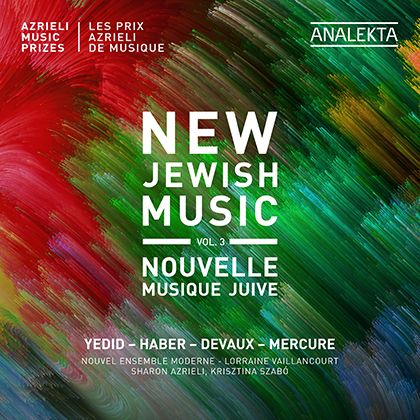 We find on this album: Keiko Devaux (The Azrieli Commission for Canadian Music), Yotam Haber (The Azrieli Commission for Jewish Music) and Yitzhak Yedid (The Azrieli Prize for Jewish Music). The three inspiring pieces are brought vividly to life by the Nouvel Ensemble Moderne (le NEM) under the direction of Lorraine Vaillancourt. Mezzo-soprano Krisztina Szabó joins for Yotam Haber’s Estro Poetico-armonico III. Also featured on the album is Jonathan Monro’s arrangement of Dissidence by the celebrated Canadian composer Pierre Mercure, created specifically for le NEM and soprano Sharon Azrieli, who joins the ensemble.

This album serves as part of the prize package each AMP laureate receives, alongside a cash award of $50,000 CAD; a gala world premiere; and two subsequent international performances – bringing the total package value to $200,000 CAD. Established in 2014, the Azrieli Music Prizes seek to fulfill the Azrieli Foundation’s pursuit of its belief in music as a vital human endeavour that allows humankind to express its creativity; to expand its worldview; and to foster positive cultural exchanges.

New Jewish Music, Vol. 3 – Azrieli Music Prizes opens with Yitzhak Yedid’s Kadosh Kadosh and Cursed. Yitzhak Yedid writes, “Kadosh Kadosh and Cursed was inspired by the Temple Mount in Jerusalem – that holy yet explosive place, sacred to Muslims and Jews alike. The work, in two parts, consists of 24 connected tableaux, or musical scenes, that bridge compositional approaches originating from two opposing musical traditions: on the one hand from Arabic art music and Mizrahi piyyutim (Arabic-influenced, Jewish liturgical songs) and on the other from European traditions, avant-garde music and improvisation.”

The following work, Yotam Haber’s Estro Poetico-armonico III for mezzo-soprano and chamber orchestra – the third work in a series – continues a long exploration into the music of Rome’s Jewish community, as discovered through the archival recordings of ethnomusicologist Leo Levi. Haber employs these recordings of traditional cantillation and liturgical texts in conjunction with – or in opposition to – texts by four modern Israeli poets (Ory Bernstein, Eli Eliahu, Israel Bar Kohav and Aharon Shabtai) that reflect upon aspects of modern Israeli life while also grappling with its history.

Rounding out the AMP-winning works, Keiko Devaux’s Arras – meaning a richly woven tapestry – is a kaleidoscope of influences over generations, cultures and musical genres within Devaux’s, and her families’, sonic histories. Devaux draws inspiration from a range of material representing the professions of both sides of her family tree (the sound of wind through fields symbolizing agriculture, and that of a mechanical loom apropos of weaving), the natural environments in which they lived (including patterns of animal behaviours such as those of starlings and fireflies), as well as the musical traditions both religious (plainsong and Buddhist chant) and vernacular (chanson française and Japanese-American popular) music through which these families expressed their identities.

Complementing the three AMP-winning works, Canadian composer Pierre Mercure’s Dissidence concludes the recording, arranged for soprano and 14 musicians by Jonathan Monro. In reflecting on this arrangement for le NEM, Monro said, “From the controlled fury of Les lions jaune to the loneliness of Psaume and the ecstasy of Le cri de joie, each of these songs is a personal journey; and it is my hope that every detail of my orchestrations feels just as personal.”

Keiko Devaux is a Montréal-based composer who writes for ensembles, dance and film. Her compositions focus on musical ‘translations’ of experience through the interpretation of extra-musical form and patterns. She holds a Master’s in Instrumental Composition from the University of Montréal and is currently completing a Doctorate in Composition under the direction of Ana Sokolović and Pierre Michaud. She has been awarded several distinctions, including the 2019 Jan V. Matejcek Award from the SOCAN Foundation and the audience and jury prizes of the 2017 Accès Arkea Competition. She was the 2016-18 composer in residence with Le Nouvel Ensemble Moderne and is currently a Carrefour composer-in-residence with the National Arts Centre Orchestra.

Yotam Haber was born in Holland and grew up in Israel, Nigeria and Milwaukee. He is the recipient of many prestigious prizes, residencies and commissions, and is widely performed by the leading new music groups around the world. Haber is Associate Professor at the University of Missouri-Kansas City Conservatory and Artistic Director Emeritus of MATA, the non-profit organization founded by Philip Glass that, since 1996, has been dedicated to commissioning and presenting new works by young composers from around the world.

The multi award-winning Yitzhak Yedid melds the music of his ancestral Syrian and Iraqi Jewish background with Western art music. His musical style is eclectic, multicultural and very personal, blending jazz and Jewish cantorial music with classic European and avant-garde techniques. His added experience as an improvising concert pianist allows him to create a highly expressive, eclectic and alluring new Jewish music. Yedid studied piano at the Jerusalem Academy of Music and Dance, continued his schooling at the New England Conservatory and earned a Ph.D. from Monash University. He currently lectures in composition and piano at the Queensland Conservatorium Griffith University in Brisbane. Most recently, Yedid was named a 2021 Prelude Composer in Residence at Gallop House in Australia.

About the Azrieli Music Prizes

Established in 2014, the biennial Azrieli Music Prizes (AMP) seek to fulfill the Azrieli Foundation’s pursuit of its belief in music as a vital human endeavour that allows humankind to express its creativity; to expand its worldview; and to foster positive cultural exchanges. Open to the international music community, AMP accepts nominations for works from individuals and institutions of all nationalities, faiths, backgrounds and affiliations, which are then submitted to its two expert juries through a biennial open call for scores and proposals.

Founded in 1987 by François Mario Labbé, Analekta is the leading independent classical record company in Canada. It has produced over 700 albums, recorded more than 200 musicians among the most visible in Canada, and received many awards. In 2021, the works in the Analekta catalogue reached 300 million streams on international streaming platforms.