Breaking new ground at the Azrieli School of Architecture 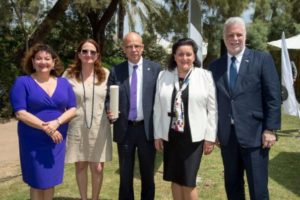 The Azrieli School of Architecture at Tel Aviv University was established in 1993. As enrolment increased and the programs expanded, the school outgrew its building. The new state-of-the-art facility, which is scheduled to be completed in 2021, will extend over 5,000 square meters and be situated at the front edge of the campus on Antin Square, at the corner of Einstein and Chaim Levanon Streets. For the first time in the history of TAU, one of its faculty buildings will prominently face onto a public street, and will include retail space open to the public, as well as a gallery for the School of Architecture.

Naomi Azrieli, Chair and CEO of the Azrieli Foundation in Canada says, “One of the key aims of our Foundation is to support education and architecture – an objective also close to the heart of our founder, David J. Azrieli. As a Zionist, philanthropist and an architect, he felt passionately that Israel needed more architects to build the country, literally and figuratively. Literally, because we know it is vital to ensure solidly educated undergraduates who can change the landscape. Figuratively, because this School now provides Master’s and Doctorates for exceptional architects who can research, study and inspire new students.”

Danna Azrieli, Chair of the Azrieli Group and the Azrieli Foundation in Israel, continues, “We have known since the School opened that these students needed a purpose-built facility. In fact, we still have my father’s early architectural designs of the space he imagined. We’re thrilled with what this building will offer as well as the prominent location on campus, which sends a message about the importance of training tomorrow’s architects. We are proud of what this school has become.”

Dr. Eran Neuman, Head of the Azrieli School of Architecture at Tel Aviv University said: “We anticipate that the new building will double the area of the current School of Architecture building. It will be meticulously planned to incorporate innovative classrooms, computer workshops, digital laboratories fitted with the latest technologies, areas dedicated to workshops, lecture halls, seminar rooms, and a gallery.”

Prof. Joseph Klafter, President of Tel Aviv University, thanked the Azrieli Foundation for its long-term involvement in development of the University, saying: “In recent years, a real need has arisen for a new building that is able to provide a response to the unique and varied needs of the architects of the future. Thanks to the generous contribution of the Azrieli Foundation, we can now provide that response.”

The Azrieli Foundation funds institutions as well as operates their own programs in Canada and Israel in architecture, higher education, scientific and medical research, school perseverance, Holocaust education, music and the arts, and quality of life initiatives for people with developmental disabilities.

The current donation to Tel Aviv University is the latest in the long history of significant support for architecture and education, such as:

The Azrieli Architecture Student Prize, now in its 14th year, recognizes creativity, originality and architectural quality among recent graduates of the five Israeli academic institutions that award such degrees.

In 2005, the Foundation created the Azrieli Fellows Program, which provides generous financial support to the best and brightest researchers from Israel and abroad who will use their training to become leaders in their respective fields including Architecture. This Program supports graduate and post-doctoral students and junior faculty at seven Israeli universities in all fields.

In 2007, the Azrieli Foundation endowed the Azrieli School of Architecture and Urbanism at Carleton University in Ottawa, Canada.

The Azrieli Global Studio brings together four renowned architecture schools at Tel Aviv University, the Technion, McGill University in Montreal and Carleton University in Ottawa, providing a platform to foster cultural transfers and research collaborations between Israel and Canada.

Naomi Azrieli, Chair and CEO of the Azrieli Foundation, speaks to the graduates... Surviving Again: How Needy Holocaust Survivors Cope with Poverty
Top Scroll to top